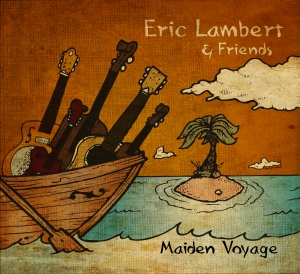 Eric Lambert has been pickin’ and grinnin’ his way into people’s hearts for over 40 years. Specializing in the fiery art of flatpicking, he has built a distinguished career writing, performing, recording, and teaching Americana music in and around Chicago, IL and beyond. Traces of rock, folk, bluegrass, country, and blues can be detected throughout his music, delivered with energy, soul, and inspiration. His voice, presence, and precision moves audiences to their feet, while his playful spirit and warm sense of joy makes people feel right at home.

Eric’s music resonates the old school philosophy of the groundbreaking musicians who inspired him; music should know no boundaries. Influenced by Duane Allman and Dickey Betts at an early age, Eric discovered country and bluegrass music through the Nitty Gritty Dirt Band album, "Will the Circle Be Unbroken." Raised on Chicago's south side, he cites diverse influences as catalysts in shaping his unique roots music sound. His original voice was crafted by blending the bluegrass approaches of Tony Rice, Clarence White, and Norman Blake with those of his main influences such as B.B. King, Bob Dylan, Jerry Garcia, and Old & In The Way.

Eric excels at every style of music he performs, moving through them with an uncanny ease and smoothness. The richness of diversity in his influences is evident in his playing and throughout his vast career, which spans 10 countries as a solo artist and as a band member. Some career highlights include playing with Virgil Kane along with Alabama and George Strait, and being a front man in bands such as Big Shoulders, Heartsfield, Valerie Smith Band, and most recently Chicago’s award-winning Henhouse Prowlers, being featured on their latest album release, "Verses Chapters and Rhymes." He has also appeared in Flatpicking Guitar Magazine.

Eric can also be found participating in many other events, projects, causes, and ensembles. There is no limit to his musical abilities and no waning on his willingness to be involved. His ‘no bounds’ mantra comes into play every time he steps on stage or into a recording studio. You can always look forward to a powerful, original performance delivered with a smile. Music lovers of all ages and backgrounds enjoy Eric’s enthusiastic approach, fueled by his genuine love and deep respect for all walks of Americana music.