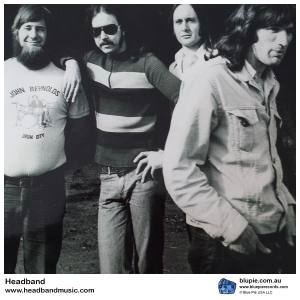 Headband is one of Australia’s most unique progressive blues rock bands that formed in the early 70’s. The four-piece group (comprised of; bass guitarist Chris Bailey; drummer Joff Bateman; singer-songwriter and keyboardist Peter Beagley (later known as Peter Head); and singer-songwriter and guitarist Mauri Berg) supported Elton John in 1971, and The Rolling Stones in 1973 at their Adelaide performances, and finished third in the 1972 Hoadley's Battle of the Sounds – a national performance competition between the best groups representing each state. The band then went on to releasing their debut album, A Song for Tooley, in 1973, which featured album artwork by internationally renowned Adelaide artist Vytas Šerelis. Headband disbanded a year later.

Following the band’s break up, keyboardist, Peter Head - who joined the Blue Pie family earlier this year - went on to start up Mount Lofty Rangers; an ever-changing group of notable Adelaide musicians that included Glenn Shorrock, Robyn Archer and Bon Scott, who later joined AC/DC. Peter set up his own label, Head Office Records, in 1996 alongside radio broadcaster, David Woodhall, producing 2 CDs; "Round & Round & Round" by Bon Scott, and Peter’s first solo CD recording "King of the Cross".

Headband’s progressive, psychedelic folk music creates a similar ambiance to that of Simon and Garfunkel, The Beatles and The Rolling Stones. Their music brings upon nostalgia and peace. In 2012, Headband will release their single ‘Song For Tooley’ as a remastered version.

Headband are a Blue Pie Records artist. For more information please visit them on the links below or search "Headband” on Google.