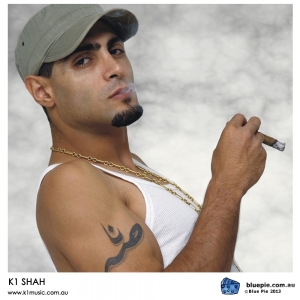 K1 and his family were in the middle of the revolution in Iran, which had caused difficulties. K1’s father lost his job and the only income for the family. To make matters worse the war broke out between Iran and Iraq. Everyday living item costs were going up to a level where it was impossible for a poor family to survive.

K1 lost his mother the young age of five, in a hit and run car accident. Because of the political differences the investigation was put aside and the driver was never charged. “Politicians were using the power of the media and school education to confuse and control the public, brain washing them into believing the only way to heaven is to die in war, and if you didn't agree you were either to be shot or sent to the front line. Kids as young as nine years old would sacrifice their lives in war believing this was their chance of getting into heaven (suicide bombing),” says K1.

For anyone who did not agree with the government’s beliefs they were striped of all rights, jobs, school or college education and even their house or land. Under these circumstances K1’s father felt there was no other option but to have K1’s brother try and escape the country through the border of Iran and Pakistan, and take K1 and his sister.

After a tough three day journey to attempt to cross the border they got caught and sent to jail and where waiting to be persecuted. They however were able to pay smugglers to help attempt a second escape, taking three days without food and water where lucky enough to successfully go through into Pakistan.

They spent fourteen months on the streets before they were accepted as refugees and traveled to Australia in August 1989. Adapting to this new life was difficult for K1 who was a young boy without his parents by his side. At school he was a victim of racism, with no one to turn to he had to bury everything inside and just deal with it.

As years past K1 learned to express his feelings and emotions through his music by writing songs. His lyrics contain his personal experiences. It is through K1’s life experiences that flows his voice of poetry, a modern day Middle Eastern, raping his experiences and hoping that the world will take notice and learn from the mistakes of the past and move towards a more peaceful existence where people can express themselves without the fear of losing their lives.

K1’s power lies in his words, words of peace.

K1 says that a “big part of the media is now out of control, what we see on television is what results in tragic events like two of my best friends whom I was very close to, were shot dead in cold blood in a drive by shooting on a busy street in Sydney. We all came here hoping to get away from the violence and live a life in peace and harmony, but it seems no matter where you go these days, the violence, corruption in politics and the self-destructing ways of the human race and also the planet earth are increasing every day, what can we do but to try and live through the present day hoping to make a difference for the future."

K1 feels the whole world is messed up. If you listen to the music and the words, you can see that K1 asks everyone to change the world with peaceful actions and make the world a better place.

K1 is now signed to one of the world’s leading independent record labels, Blue Pie Records, where he will distribute his music through to the world.