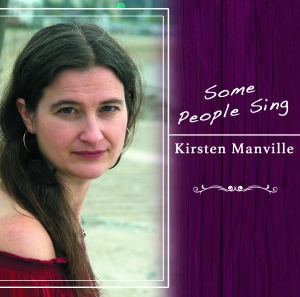 An accessible singer/songwriter with straightforward lyrics and a refreshing lack of pretense, Kirsten Manville's music is honest and heartfelt, whether she's telling a story, delving into an emotion, or capturing a moment in time. With a relaxed stage presence and ready smile, Kirsten invites her audience to share her love of music and songwriting.

"Some People Sing" is her second solo album. With elements of Americana, folk, country, and blues, the singer/songwriter creates songs that feel like they may have come straight from journal entries. Deceptively simple lyrics paint pictures, tell stories, and evoke a range of emotions. From the pain of finding and losing love, and hard times in a down-on-its-luck town, to the small pleasures of line-dried laundry and homemade pie, and the escapism of a romantic night for two, Kirsten's warm and sultry voice draws the listener in, infusing the songs with feeling and depth.

"Some People Sing" was a Top 5 pick in the January 2018 issue of Metronome Magazine, and Kirsten was featured on the cover of the magazine in March. Metronome reviewer Douglas Sloan called it "one of the finest albums of 2017." The track "...but Down" was featured in the Alternate Root Magazine's Top 10 in November 2017.

Kirsten's songs have received radio airplay on a number stations both in the United States and overseas, including WUMB, WICN, WGDR, and KZUM. Her song “A Simple Life” spent time in the Top 30 charts (peaking at number 11) of The Globe Radio, an Adult Album Alternative format internet radio station, and her song “Play My Guitar” has been in the Top 20 songs on WOSRadio. In July 2013 she was a finalist in the songwriting competition at the Ossipee Valley Music Festival, and in February 2016 she was a finalist in the Maine Songwriters Whittlesey Barn Songwriting/Performance Contest. Kirsten has had the honor of opening for well-known folk artists Don White and Joe Jencks.

Kirsten holds a BA in music from Bowdoin College, and is also an accomplished flutist. She lived in Nashville from 1995 – 2001, and sang with the Nashville Symphony Chorus. She also played out frequently at Nashville area writers' nights and coffeehouses. Since returning to the Boston area she has performed regularly, as a solo artist and as a member of the acoustic duo Kirsten & Dave. Their first CD "Dreams That Just Won't Let Go" was released in October 2006, their second, "Things You Learn," in March 2009, a holiday EP "At Christmastime" was released in November 2012, and "Good Stuff for Sale" in September 2016. Kirsten's first solo CD, "Come With Me," was released in December 2013. She released her second solo CD "Some People Sing" in September 2017.
2
What's This
Advertisement