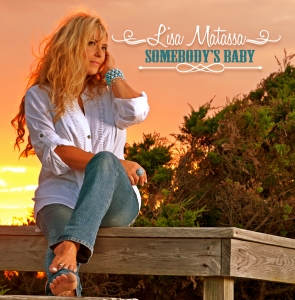 “Music is the storytelling of life.”
- Lisa Matassa


With the release of her latest CD, Somebody’s Baby, Long-Island-based Lisa Matassa takes yet another huge step forward in her career as a successful independent artist. The album reflects her musical journey through a collection of songs that are both personal and dynamic. Three of the tunes on the EP were co-written by Lisa herself (“Wouldn’t You Like to Know,” Girl with a Rock ’n Roll Heart,” “Learning as You Grow”) coupled with three covers made famous by other artists (Dolly Parton, Bryan Adams, Nat King Cole). The album’s lead-off track is Lisa’s third single, “Somebody’s Baby,” which is also included as a bonus music video.

This album is Lisa’s third country-focused recording project, following last year’s Me Time and Sunrise Highway released in early 2012. Her single, “Me Time,” shot to number one on CMT’s video charts shortly after its release, and her version of the revered standard, “The Christmas Song,” also hit number one last December and remained top five on CMT’s holiday chart during the entire Christmas season. With such unprecedented success out of the box, Lisa hopes that “Somebody’s Baby” will prove equally popular with country music fans. The song’s music video was directed by Traci Goudie, whose work includes videos for Hunter Hayes, Diamond Rio, Merle Haggard, Patty Loveless, Patty Griffin and more.

“The past two years have been a whirlwind for me,” Lisa explains. “My dreams are coming true, and I’m so grateful and thankful every single day. It’s exciting to wake up every morning and you really aren’t sure what’s going to happen. Every day is an amazing experience, and at this point in my life I’m appreciating everything more and more.”

Going into the studio to record her Somebody’s Baby CD in Nashville and New York, Lisa knew exactly what her priorities were. “I wanted people to get an idea of the journey that I’ve been on,” she explains. “I’ve been singing my whole life and I dreamed of becoming a professional musician when I was just eight years old. Music has always been a huge part of my life. I knew a long time ago that this is what I was going to do.”


But Lisa’s professional path took its share of twists and turns. Operatically trained as a child and with a resonantly powerful pop voice, Lisa recorded two top-10 dance singles before she was 20. The songs were huge hits in the U.S. and abroad, earning her performing slots on concerts with such acts as Taylor Dayne, Brenda K. Starr and TKA. Born on Long Island, but raised in south Florida, Lisa had always loved singing along to records by Patsy Cline, Loretta Lynn and Johnny Cash, and she realized more and more that country music was where her heart was. Capitalizing on country’s contemporary rock-tinged arrangements, Lisa found she could blend the natural heartfelt soul of country with her own stylized brand of New York edginess.

“No one would think a girl from Long Island would want to sing country music,”
Lisa laughs, “but I live on an island with almost 8 million people, and there are so
many country music fans now that the timing just seems right.” Although she’s heard the axiom that you need to be in Music City USA to have a successful country career, Lisa views the fact that she lives outside Nashville and is raising her family 30 Miles from New York City as an artistic advantage. As she puts it, “I want people to say, okay, here’s a woman who is not your typical 20-something country music recording artist -- she’s actually singing about what happens after you meet your Prince Charming, after you walk through that fairy tale of a relationship and you realize okay, now you’re married and now there are children and now there are bills and things you have to do. I really wanted to have songs that people can relate to on a different level.”

As a songwriter herself, Lisa also believes that ultimately, it comes down to the song. “I don’t think country music fans care where you live or what age you are,” she explains. “It comes down to being able to evoke an emotion in a listener where that person can turn around and say, wow, she’s singing about something I felt just an hour ago . . . she’s singing lyrics that express just how I feel! I’ve been there, too, I’ve felt that way – oh, and by the way, who is she?”

Actually, that “who is she” question probably won’t remain unanswered much longer. As Lisa’s career gains momentum and Somebody’s Baby continues gathering national attention through digital downloads, streaming and radio programming, it’s a sure bet Long Island won’t be the only place where the name Lisa Matassa generates real excitement in country music.