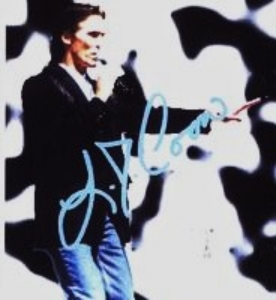 Artist singer-songwriter L J Coon
has been getting his music heard in the right places World Wide.
With the Help of many radio professionals around the globe

*When you have eliminated the impossible, Whatever remains, However improbable, Must be the truth* February 3, 1959 ... The 1959 Report: *The February 1959 CAB Report stated that... * "The Ignition Magneto Power Switch was found in the OFF position" (a 3-step position keyed maneuver) "The Landing Gear was found in the UP position" "The Landing Light was turned back on" "The fact that the aircraft touched the ground (right wing tip first) with the nose lowered slightly, indicates that some control by The Pilot was being effected at the time" "The aircraft's compass was found stuck on a Northwest 315 degree heading" - All in 3.6 seconds - As The Pilot commenced a 'Forced Landing' from level at 800 feet with a ground Speed of 105 miles per hour ... All 4-occupants would have been seated safely in The 1948 Beech Bonanza-35 fuselage still some 11 feet off of the ground (with Landing Gear Up) then the 16 foot right wing (right wing tip) Touched The Frozen farm field First, nosed over, and the Airplane that Beech corporation advertised as it would protect 'The Occupants' in a Forced Landing, started coming apart. With The Aircraft's cabin now wide open... The Bonanza-35 turned 180 degrees and slid backwards for a total of 588 feet depositing the right wing around 295 feet in this backwards slide. As The Aircraft reached a 9- strand barbwire Fencing (Tail first) (The Beechcraft safe secured cabin had ripped wide open). As The tail section pressed against the barbwire fencing the nose of N3794N whipped to the right then to the left coming to rest tail first as the left wing flipped over leaving the left wing in a normal looking yet backwards configuration.
https://ljcoondonnalcleaves.hearnow.com/pretty-blue-eyes-pretty-blue-eyes

Show Me The Way
written by: L J Coon

Today we need, to pray for peace and our own miracle
Cause there’s hurt and hunger everywhere, people living in the streets
Our young have scares; the old say its life but it ain’t worth living
Show me the way, Father I can't wait

L J Coon " The Wall "
L J performed his Memorial tribute song called " The Wall " as a tribute to the thousands etched in granite, their families, and our nation. The tribute includes mention of its founder Army Veteran Jan Scruggs, and architect Maya Ying Lin.
This song was placed in a time capsule for future generations.
http://www.cdbaby.com/cd/ljcoon14
The Wall ( Memorial Tribute )

Country Rock at it's best and a really great Line Dance. This song has launched a grass roots effort
to support Pulmonary Rehabilitation for those living with COPD and in recognition of those that have
passed from this disease.


Chronic obstructive pulmonary disease COPD
"My breathing requires effort," "I feel out of breath," "I can't get enough air in"
People with COPD typically first notice systems during vigorous exercise when the demands on the lungs are greatest.
The primary risk factor for COPD is chronic tobacco smoking.
Intense and prolonged exposure to workplace dusts found in coal mining and the cotton textile industry and chemicals such as cadmium and fumes from welding have been implicated in the development of airflow obstruction, even in nonsmokers.

There is currently no cure for COPD; however, COPD is both a preventable and treatable disease.

This song is a nice little two-step and out just in time for Valentine's Day on Air Play Direct and available on C-D Baby
http://www.cdbaby.com/cd/ljcoon

Was on the European Hot Top 40 charts. This song has also inspired several line dances, one of which can be viewed on You Tube.
http://www.youtube.com/watch?v=wJhtRVB7gKc

A magical whimsical tale with all of our childhood fairy tale characters. What a wonderful
Christmas time song, a great bedtime children's story.
http://airplaydirect.com/music/allindianz/
http://www.cdbaby.com/cd/ljcoon

What a great ballad from the early days of January-1935 and the times leading up to August-16-1977
A story of a couple and how he was remembered and Loved.
http://www.cdbaby.com/cd/ljcoon

L J Coon's father Charles W. Coon purchased a guitar which he gave to L J who was 10 years old at the time. This guitar became the tool of inspiration for what has now become a catalog of more than 500 songs.

Nashville, TN was very instrumental in providing an avenue for L J 's song writing and personal exchanges
with those in the industry.

From being involved in building a wood play area for the community, to making arrangements to start the
recording process for many of his songs on the C-D " Livin In The Country Lane " as well as others.
L J worked, wrote songs, and became involved in the music industry as well as the community.

L J met many friends as part of the music row environment, and he has provided support and guidance to other Artists who are on their own music related journey. L J continues to nurture his music city ties with many musicians, music row, record and publishing companies within the great Music City community.