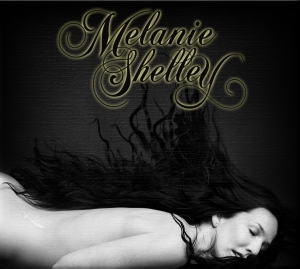 Available On iTunes/Amazon on September 20, 2011
Through Happy Marriage Records

If Melanie Shelley knew what fate would throw her way while she realized her musical life, she would thought more than twice about following her talent. A mystical woman from a tiny desert town, she has given birth, cheated death, been excommunicated and impaled, gone financially boom and bust, found and lost husbands, tussled with faith and made peace with it.

The path that this singer/songwriter has traversed is what her debut album, "Melanie Shelley" (arriving September 20, 2011 on Happy Marriage Records), encapsulates. Armed with elegantly trippy, straight-shooting alt/folk/rock compositions, a voice as pure as Karen Carpenter's and clear-eyed wisdom, Shelley gives a testimony relatable to anyone who has ever loved, lost, or both.

"There are bad - and I mean bad - parts of life, and then there are unimaginably good ones, and we are going to live out both of them," Shelley says, of the message the album conveys. "You have to be open to all of it. Anybody who’s had their own life trauma or lost someone in a tragic way knows they are actually richer people for it . . . though none of us would ever have agreed go through it."

Focus track "Dry Creek" displays Shelley's talent for conveying an authentic sense of time and place. The song paints the landscape of her hometown, Joseph City, Arizona, buffeted by dry wind and the slow crawl of time. Here, the fifth-generation Mormon started her remarkable journey to completing the album—one that saw her abandoning the church due to philosophical differences, as told in “Chosen Daughter,” and embracing a universal spirituality that is not only told, but sonically experienced by the listener in "Ascending Spiral Sea".

Produced in Williamsburg, Brooklyn by Mark Ephraim and Chris Moore, "Melanie Shelley" was a labor of love in the making. In her lifelong quest for spiritual truth; falling upwards into a successful celebrity hairstyling career; falling deeply into love with Big Country front man Stuart Adamson and recovering from his untimely death; navigating a surprise twin pregnancy, Melanie never abandoned her earliest direction: to live life as a storyteller. While lyrically, Shelley leaves no truth unturned, she also lays herself bare on her album cover by displaying the 12-inch scar on her back, the result of being accidentally impaled by a candelabra during the frantic weeks when Adamson went missing before his death in 2001.

"I’ve come to believe that the scar is a gift - my higher power saying, ‘Everything that cuts you, heals up eventually. It all finishes, and it all starts over.' "

Shelley documents her relationship with Adamson on "Can't Fix You," a day-to-day journal of living with Adamson's alcoholism, and "Ghost I Know," a track she co-wrote with Victoria Venier that heart-breakingly recounts being haunted by his memory during every waking and sleeping hour. Then, after unexpected motherhood and a divorce, an understandable sense of wariness permeates the toe-tapping, one-night-stand proposition that is "Nashville (Ain’t No New York City,)” as well as the sexy, desert noir-ish "Fabian Cordero (Is The Devil)." A justifiable need for light and laughter became the inspiration for "Maybe I Like Girls," a carefree, summer-of-love song that explores the throes of a young, same-sex crush.

Suzanne Vega and Shawn Colvin fans will appreciate the immediacy of tracks like "Harden My Heart," - a sparse rendition of the '80s Quarterflash hit that reinforces Shelley’s don't-look-back ethic - and "Possibility,” where against a lilting backdrop of trumpets and piano a challenge to the promise of what higher love can bring is issued. Drawing upon the storytelling influence of Patti Smith, Ralph Stanley and Gillian Welch, Shelley delivers the aforementioned "Chosen Daughter," a spoken-word tale of judgment and deliverance.

Finally, this year, after decades of God, superstars, lovers and babies consuming her time and her heart, Shelley completed the album, supported by a stellar roster of musicians that includes guitarist Tom Bukovac (Sheryl Crow, Rob Thomas, Keith Urban), fiddle player Andrea Zahn (James Taylor, Vince Gill), cellist John Catchings (KT Tunstall, Jars of Clay) and horn players Kelly Pratt and Jon Natchez (Arcade Fire). It's no wonder that once the masters were finished, she wept with relief. Now she's wasting no time preparing for a release show in New York on September 20, 2011, and secondary release performances in Phoenix and Nashville.

"At this point, my music has earned it’s space in the world," Shelley says. "I’ve given life all I had every step of the way, and now it’s returning the favor. The roadblocks have become the album’s strongest foundations, and it’s my job to remember that the suffering it took to get here is over - now it’s time to enjoy the experience of bringing peace and understanding to others."