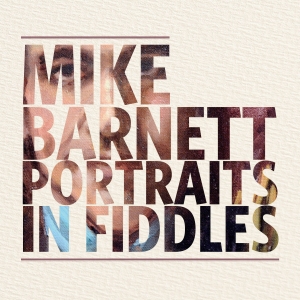 Though he’s a Nashville native who became a professional player at a young age as part of Jesse McReynolds’ band, Mike Barnett can still be considered another breakout talent from the Boston roots music scene that produced the likes of Lake Street Dive, Crooked Still and The Deadly Gentlemen, a newgrass outfit where he held fiddle duties from 2011 to 2014. On his 2019 GRAMMY-nominated second solo album, PORTRAITS IN FIDDLES, he takes a moment to reflect on the extraordinary blessings he’s had building a career as a premier fiddler in bluegrass music (leading up to his current
gig as a member of Kentucky Thunder, the traveling band of bluegrass legend, Ricky Skaggs) and to celebrate his heroes, collaborators, and contemporaries. The album is a unique snapshot of the music’s finest, from Buddy Spicher and Jesse McReynolds to David Grisman and Stuart Duncan, on to Bryan Sutton and Tony Trischka with special guest vocals from Tim O’Brien. Barnett curated the set and in many cases arranged the compositions, putting himself in harm’s way as it were, a short interval
away from the titans of the form, settling into composed instrumental breaks or trading off on improvisation, an exercise he says was intended to “put me up against my heroes as a challenge, to push me to always achieve my best.” Interspersed
throughout the tracks, his musical guests offer commentary on their own career beginnings or insight into some of the special compositions he’s chosen for this thoughtful collection.
24
What's This
Advertisement