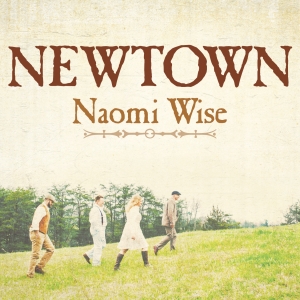 The sound of a great band is usually developed through the relationships the members have with one another as much as their technical abilities. This is certainly the case with NewTown, which features the first-rate vocal and instrumental work of five musicians who share a bond that combines individual virtuosity with a background of formal training.

Based in Lexington, Kentucky, and fronted by award-winning vocalist/fiddler Kati Penn Williams and her singer/banjo-picker husband, Jr. Williams, NewTown is one of the most exciting acts in contemporary Bluegrass. The band was formed in 2009 when Jr. left Bluegrass band NewFound Road to play full-time with his wife in what would become NewTown. Since then, the group has gained a strong following by playing at festivals throughout the U.S., sharing bills with such acts as Rhonda Vincent & the Rage and Doyle Lawson & Quicksilver. NewTown has appeared several times at the legendary Station Inn in Nashville, and has performed twice at showcases at the IBMA’s World of Bluegrass in Raleigh, North Carolina. The ensemble has also opened shows for the John Cowan Band, whose namesake leader says on NewTown’s website, “Bands like NewTown are not by any means common; they’re not made everyday. It takes sweat equity, passion, patience and vision.”

Kati and Jr. are seasoned veterans of the Kentucky music scene, and not strictly in the Bluegrass arena. Kati’s solo resume boasts numerous appearances as the opening act for major stars of Country as well as Bluegrass, and Jr. has performed Gospel music since grade school. The band has gone through some personnel changes over the years, but today’s NewTown, according to Jr., features “some of the finest musicians I’ve ever had the opportunity to pick with.” He attributes this to the fact that the rest of the members – guitarist/vocalist Hayes Griffin, mandolinist Mitchell Cannon, and bassist/vocalist Travis Anderson – have college education backgrounds in music in addition to their collective decades of performing experience.

Kati says that the band sometimes veers a little to the left of down-home Bluegrass, but no matter what they play, they wear their roots on their sleeves. “We play traditional Bluegrass but we also have a little Newgrass feel,” she says. “We don’t really get too extreme on either side, so I feel like we’re in the middle somewhere. We’re definitely more progressive. Especially with Hayes on guitar and Travis on bass because they’re so well-versed in jazz, and Mitchell is very versatile as well. But in the end, we’re still a Bluegrass band.”

While Kati’s singing brings to mind Dale Ann Bradley, Alison Krauss or Lee Ann Womack, her voice is all her own, with both a power that challenges the band to keep up with her, and a passionate subtlety that breathes emotion into the quietest passages. She also won the 2016 award for “Best Artist in Performance – Strings” at the Lexington Music Awards for her fiddle playing. Jr., meanwhile, brings to mind the vocal phrasing of Chris Stapleton with a more rough- around-the- edges Dan Tyminski, or maybe a grittier version of Larry Sparks. And on the banjo, Jr. evokes the spirit of Earl Scruggs while playing tasteful licks that add to the pulse of the rhythm section.

NewTown’s 2013 album, TIME MACHINE, was one of the most talked-about Bluegrass releases of that year. The album received significant airplay on Sirius XM satellite radio’s Bluegrass Junction channel, and the single “All I Was to You” reached number one on Bluegrass Today’s weekly and monthly airplay charts.

The band’s newest album, HARLAN ROAD, once again finds Kati and Jr. turning in outstanding vocal performances, with exceptional instrumental backing by the entire band. The project was produced by Grammy-winner Barry Bales, longtime bass player for Alison Krauss and Union Station. “Our manager knew Barry and put us in touch with him, and he was great to work with,” Kati says. “We had a group of songs we were considering for this album that we thought might be good for us, and Barry helped decide which ones would work best. When we got to the point that we had 11 songs we liked, we were ready to go.”

HARLAN ROAD was recorded at the studios of the band’s label, Mountain Home Records, in Arden, North Carolina. From the uptempo waltz “The Heart You’ve Been Tending,” to the Civil War-era feel of “Hard Times” – both penned by up-and- coming Kentucky singer-songwriter Tyler Childers – to the Americana vibe of “Wildfire” by Sarah Siskind, the album shows NewTown to be a band that, while they can play anything, excels at staying true to their Bluegrass roots. HARLAN ROAD’S first single is the Appalachian-flavored title track, a minor- key song of loneliness and longing written by Childers. Also featured is the Old-School- Rock inflected “Can’t Let Go,” written by Americana artist Randy Weeks, and covered by Lucinda Williams on CAR WHEELS ON A GRAVEL ROAD.

Jr., a multi-instrumentalist who has spent years on the road and in the studio, says that this version of NewTown may be the most promising and fulfilling situation he has been involved with. “Everybody understands what this band is and what our goals are, and we’re all on board 1,000%,” he says. “I couldn’t have written a script, couldn’t have hand-picked people and put them in place, any better than what NewTown is today.”

NewTown features the first-rate vocal and instrumental work of five of the finest musicians in acoustic music who share a bond that combines individual virtuosity with a background of formal training. The band is based in Lexington, Kentucky and fronted by award-winning vocalist/fiddler Kati Penn Williams and her singer/banjo-picker husband, Jr. Williams. They are joined by the extraordinary talents of guitarist/vocalist Hayes Griffin, mandolinist Mitchell Cannon, and bassist/vocalist Travis Anderson – all who have college education backgrounds in music in addition to their collective decades of performing experience.