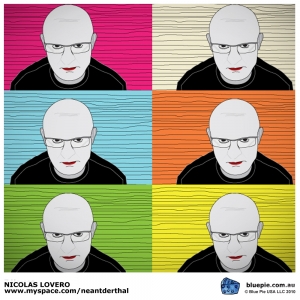 It is very difficult to talk about passion because we can never find the right words to describe what burns within us. Nicolas developed his musical skills by following numerous courses of guitar tuition in several schools and academies. He says that sometimes, he wakes in the morning with a tune in his head, a song waiting to be completed, as if creating subconsciously during his dreams. Nicolas Lovero loves to mentally compose music and ideas while walking in the street, taking the subway in Paris, travelling by car or train, or sitting at a sidewalk cafe watching the world go by.

Nicolas Lovero created, composed, played and orchestrated 10 pieces of instrumental music. These songs were recorded in his apartment and are now broadcasted in restaurants, hotels and supermarkets across the USA. Four of the tracks on his CD “Women of this world” are marketed by DNB Productions.

Nicolas Lovero/Néant Rouge is distributed to the world digitally by Blue Pie.