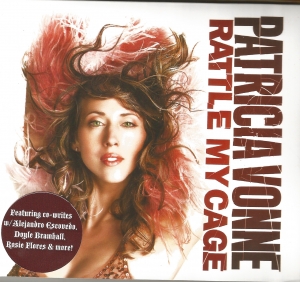 Over the eight years since her debut album, Patricia Vonne has proven herself a truly ascendant and transcendent musical artist. The lovely San Antonio, Texas born and bred Chicana "has absorbed just about every indigenous musical style Texas has on offer, and can summon any one in the flick of a castanet or guitar pick," notes the Houston Press. In the same fashion as her lyrically and stylistically multilingual sound melds and soars above a rainbow of genres and musical flavors, Vonne has also handily crossed geographic borders, rising to popularity across Europe while also "quickly taking her place among Texas's musical treasures," notes the Austin Chronicle. In the process Vonne has won the highest praise and comparisons in the music media. "Imagine a young Chrissie Hynde fronting the Mavericks with a little help from Calexico," raves England's Word magazine. "Looking like a gypsy Polly Harvey and sounding like Lucinda Williams with Nick Cave's sense of doom," observes Mojo. It's no wonder The New York Times praises her as "this Renaissance woman of Austin, Texas," where Vonne now resides.

Making her initial mark on the Manhattan club scene, Vonne recorded her self-titled debut album in the Big Apple before relocating to Austin in 2001 and releasing it on her own Bandolera Records the following year. The Austin American-Statesman dubbed her "a Tex-Mex spitfire with a rock'n'roll heart [who] plays a border-crossing bilingual mix of flamenco flamboyance and down-in-the-mud exuberance that's a Lone Star original," while the Austin Chronicle praised the disc as a "bilingual tour de force [that] melds eclectic with electric and exudes an elegance seldom associated with rock."

She followed with Guitars & Castanets, which No Depression hailed as "a bold venture dripping with passion and style" on which she celebrated her Lone Star State and borderland roots. It included salutes in song to such inspirations as Ely ("Joe's Gone Ridin'"), Alejandro Escovedo ("Guitarras y Casta�uelas") and Johnny Reno ("Sax Maniac"), and guests like noted Austin guitar stars and singer-songwriters Charlie Sexton and Jon Dee Graham as well as Chris Isaak band saxophonist Reno. The CD's bonus track, "Traeme Paz," was featured in the film and on the soundtrack album for Once Upon A Time In Mexico. "If her debut was flat out stunning, call this a knockout," effused Harp.

Album three, Firebird, garnered even further praise as "her strongest yet," observed her hometown San Antonio Express News. "Great stuff, passionately played, exquisitely arranged and meticulously delivered," noted Newhouse News Service. The songs reflected her time in Europe on the musical tour diary of "Dutch Cigarette" and her tribute to famed poet Federico Garcia Lorca, "La Huerta de San Vincente," inspired by a visit to his home in Granada, Spain. The disc was bookended by the English and Spanish versions of her song "Missing Women"("Mujeres Desaparecidas") for the hundreds of young women murdered in Juarez, Mexico.

Worth It is the third album Vonne has recorded with noted Austin producer Carl Thiel, who has proven a perfect musical and spiritual recording guide thanks to his youth growing up in Mexico City. It features her band Robert LaRoche, founding guitar player and collaborator formerly of Virgin Recording artists "The Sighs", drummer Dony Wynn (who has toured and recorded with Robert Palmer and Brooks & Dunn, among many others) and bassist Scott Garber (whose many credits include work with Giant Sand, The Indigo Girls, Timbuk 3, Alejandro Escovedo, The Silos, The Sidewinders/Sand Rubies and Ronnie Lane). Rick Del Castillo of Austin's Del Castillo brings his wondrous gut-string flamenco guitar playing to the mix, San Antonio's Joe Reyes burns on electric guitar. Together they all create true Texas music for the world.

Along the way, Vonne made her mark on the silver screen playing Dallas/Zorro Girl in Sin City as well as a part in Spy Kids. Next year will see her in Machete 2 and Sin City 2 reprising her role as "Zorro Girl". She was the 2009 Grand Prize winner in the Latin category of the John Lennon Songwriting Contest for "La Huerta de San Vincente," and "Mujeres Desaparecidas" was donated as a free download on the Amnesty International website.

For the young girl of yore who would have loved nothing more than to make music when she grew up, Vonne's career has been Worth It indeed (one reason why the new album strives to give back to others through lyrics and music from her great big warm heart). "It's been more than a dream come true," marvels Vonne. "And it keeps getting better."