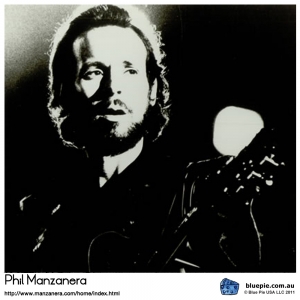 Blue Pie will be working with Phil to develop licensing opportunities in film, television, cable and general advertising placements. Phil’s catalogue is wide and diverse with something there for everyone!

As a writer, producer and solo artist, Phil Manzanera has worked with many of the luminaries of modern music, such as Steve Winwood, David Gilmour, John Cale, Godley and Creme, Nico (Velvet Underground) and John Wetton (King Crimson, Asia). He has co-written material with many artists, including Brian Eno, Tim Finn, Robert Wyatt and David Gilmour. Manzanera co-wrote Pink Floyd’s single ‘One Slip’ from their 1988 ‘Momentary Lapse of Reason’ album. In 2008 Manzanera co-produced David Gilmour: Live in Gdansk as well as David Gilmour’s 2006 chart topping album, On An Island, he also toured with Gilmour playing concerts in Europe and North America. Also in 2008 his production of Enrique Bunbury’s album Hellville DeLuxe, was no. 1 in Spain and Mexico enabling Bunbury to play the biggest ever concert in Mexico city to 120000 people.

Whilst in Roxy Music, the band released a series of internationally best-selling albums, achieving ten UK Top 10 albums and touring extensively throughout the world. In parallel with Roxy Music, Manzanera has always pursued solo projects, both recording his own albums and producing for others. All his previous solo albums have been digitally remastered and re-released with new artwork on his own label, Expression Records.

Blue Pie is very elated to be working with a musician and producer of Phil Manzanera’s calibre!