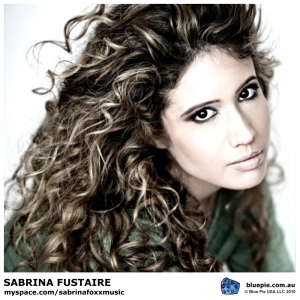 Singer and part-time actress, Sabrina Fustaire is one of the most sought after talents for music and film. Her original music gained much attention from her fans and other record labels, the songs are Pop/Rock delicacies.

Her songs were co-written by herself and some of Nashville’s most talented writers. These demos were produced by Kent Wells, who has produced many of the latest Dolly Parton albums and has also worked with other great names including Kenny Rogers, Lee Greenwood, Keith urban, Lee Ann Womack, Michael Peterson, and Neil McCoy. Since the beginning of Kent’s involvement, he believes that these incredible songs matched with Sabrina’s extraordinary vocal talent, which has landed her a deal with Blue Pie.

In 2004, Sabrina immersed herself in music exposing her to classic artists like Mariah Carey, Aretha Franklin, Barbara Streisand, Whitney Houston, Dixie Chicks and Celine Dion. Recently, Sabrina began playing piano and writing her own material. She is now an accomplished piano player and a great songstress.

A few of her influences include the Beatles, Elton John, Billy Joel, Carol King, and Bob Dylan. She’s already had the opportunity to sing some of her original songs at various nostalgic venues in Hollywood like The WHISKY A GO GO and The Historic Culver Hotel. After her recent signing to Blue Pie Records, she will be backed with some of the most experienced and worthwhile producers around the globe.

This will also be one of the first projects that Steven Ray, Music Executive & Quincy Jones Protégé, will be working on with the Blue Pie team. Starting in the music business interning under Quincy Jones on the top selling album of all-time, Michael Jackson’s Thriller. Steven has worked with the likes of Mariah Carey and Ne-Yo, He was the former Urban Director of Music Worldwide at Windsept Holdings and Capitol Records. He has been in the business for over 30 years in the business.