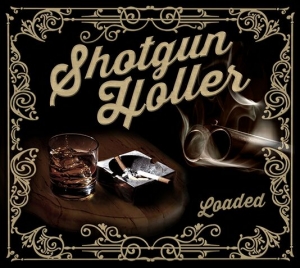 (BOONEVILLE, KY) - It's not often that a bluegrass band comes around sporting tattoos and singing about things that some radio stations of that genre might find a bit left of center. But that's exactly what Randall Deaton liked about Shotgun Holler, the new five-piece bluegrass band with an edge, when he signed them to his Dry Lightning Records.

Shotgun Holler was founded by mandolinist Shawn Brock and vocalist/guitarist Matt Jones out of a desire to create substantive music in the genre they love. The duo then brought on bassist Rod Lunger, banjo player Nathan Treadway, and fiddle player Evan McGregor who all hail from various cities around the Midwest. On the new record Loaded Jones penned three of the album's 11 tracks: "I've Got Ramblin On My Mind," "Miners Grave," and "One Lone Tree." The rest of the record showcases the band's modern take on bluegrass songs, as well as their unique renditions of the alt-country song, "Methamphetamine" by Son Volt, and "Relatively Easy" by singer/songwriter Jason Isbell, who is a former member of alt-country band Drive-By Truckers

Of the Son Volt and Isbell covers, Deaton says, "I think these drug-abuse-related songs are good examples of the band doing non-traditional bluegrass themed material and are some of the most interesting cuts on this record.”

"We don't really fit the typical bluegrass mold of today. Instrumentally we are recognizable as bluegrass. We're using the traditional bluegrass instruments,- banjo, guitar, upright bass, mandolin, and fiddle. Where we tend to cross into other areas is the content that we choose to sing about, which can be very non-traditional. Lyrically, all of the songs aren’t necessarily wholesome," Brock said.

Loaded was produced by Mountain Heart founding member Jim Van Cleve at Lonesome Day Studios in Booneville, Kentucky and is set to be released and distributed by Dry Lightning Records and Sony Red on June 30. Van Cleve has produced award winning projects spanning a variety of genres for acts such as Mountain Heart, Newfound Road, Del Shields, Celebration of Life II (Musicians Against Childhood Cancer), Annabelle Road, his own Grammy Nominated solo project, and the IBMA Awards Show Theme, among others. Van Cleve engineered the album with Greg Lawrence. Van Cleve, Brock, and Jones mixed the project.