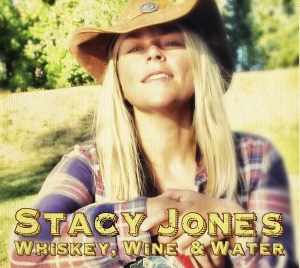 
Winner of the 2015 IMEA award "Blues Song of the Year" "Can't Do Nothing Right."
Winner of the 2016 Washington Blues Society "Best of the Blues," award Best NW Recording- Whiskey Wine and Water, Blues Songwriter-Stacy Jones


The seventh release from *Stacy Jones*; the winner of the 2014 & 2010 Best Female Vocalist from the Washington Blues Society.
Produced by Stacy Jones and Floyd Reitsma.
Recorded and Mixed By Floyd Reitsma at Studio Litho, Seattle.

*Stacy Jones *"can't do nothin' right." Or maybe she can, with this collection of 12 original songs recorded and co-produced by Floyd Reitsma (Pearl Jam and Dave Mathews) at Studio Litho in Seattle.
Continually nominated for "Best of the Blues" Awards in songwriting,performance, harmonica, guitar and winning vocalist of the year, Stacy shows her talents off in this compilation new of songs about love, lost love, whiskey drinking and life on the road. With her fourth studio album Stacy Jones shows off her country, folk and Americana roots while always having a touch of the blues in her soul.

Having made appearances at SXSW, Chicago Blues Festival, Beale St.Memphis during the International Blues Challenge and several other national and regional festivals,her talent is awaiting the next level of recognition.