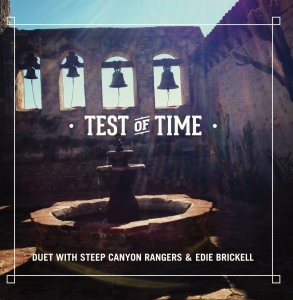 
This special song, available as a single-song disc through Steep Canyon Rangers and digitally through iTunes and other digital outlets, will benefit Oskar Blues Brewery’s CAN’d Aid Foundation.

Woody Platt shares the story of how the song came to be: “On the morning of Sunday May 11th, we loaded onto the tour bus leaving from Bellingham, Washington to catch a ferry over to Nanaimo, British Columbia, while on tour with Steve Martin and Edie Brickell. Edie climbed into the bus full of sweet bubbly energy (which was nice especially because I was very flat and sad – it was Mother's Day, the first one since my mom died unexpectedly in July of 2013). Edie, being a mother herself, was in such a bright mood it lifted my spirits in a big way. She was humming a fun melody and was determined to turn it into song. She is such a great writer, very natural and quick. I joined her and together we worked on the song as the tour bus traveled in the belly of the ferry. By the time we hit shore in Canada ‘Test of Time’ was done! We worked out a quick arrangement with the rest of the Rangers and played it on the show that night. It's a real pleasure to sing this duet with Edie. Shortly after the tour was completed, we all met up in Nashville and enlisted musician/producer Carl Jackson to produce the tune. We are proud of the finished product and thrilled that it can be used to benefit the CAN’d Aid Foundation. Enjoy!”
-Woody Platt

“This song was hands-down one of my favorite musical experiences--all the way from working it out with Woody on the ferry to Vancouver Island with Steve listening and offering us his bounce, to recording it with those talented Rangers in Nashville while Carl Jackson and Luke Wooten created such great sounds and a fun-loving environment.”
-Edie Brickell

“I recently produced an old standard called ‘Sweet Heaven When I Die’ on the Steeps along with Steve Martin for my upcoming project, Orthophonic Joy: The 1927 Bristol Sessions Revisited. While planning for that session, the guys asked me if I would consider producing a single on them and Edie Brickell while we were in the studio.
Having the wonderful opportunity to also work with Edie was enticing enough, but after hearing the song they wanted to record, my excitement level went even higher. I think Edie must have channeled Ira Louvin while writing “Test Of Time” and to me she and Woody sound like the classic bluegrass male/female duet that never transpired in an awesome Porter & Dolly meets Ira & Charlie meets Conway & Loretta meets Jim & Jesse meets Johnny & June meets Carter & Ralph meets George & Tammy meets Johnny & Jack experience.”
-Carl Jackson

At the Oskar Blues CAN’d Aid Foundation, we dig beer, bikes, music, food & family – and we’re rallying around the things we love to raise money for things that matter. We’re thrilled to have the Steep Canyon Rangers onboard as “TUNES” ambassadors, and appreciate SCR & Edie helping us spread the love and “do-goodery” far and wide through the release of this single.