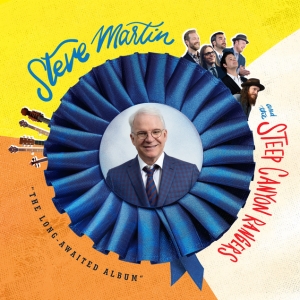 A pair of lab technicians fall in love over spirochete cultures. Two kids from a small town meet in the big city and get married. A guitar player nurses a broken heart and ponders the nature of creativity on his front porch. A man goes to dinner and regales his date with stories about his ex.

“The Long-Awaited Album,” Steve Martin’s long-awaited new album with the North Carolina group the Steep Canyon Rangers, is full of stories that mix humor and melancholy, whimsy and realism, rich characters and concrete details. And lots of banjos. That instrument—so dexterously, even acrobatically picked and strummed—proves just as crucial to relating these tales as the lyrics themselves, each chord and riff revealing depths to Martin’s narrators and to his musical talent.

In the eight years since The Crow introduced him as an idiosyncratic bluegrass musician, as fluid in his technique as he is knowledgeable of its history, Martin has worked to refine his craft and push the form forward. Following 2011’s Rare Bird Alert, his first album to feature the Rangers, he recorded a pair of records with Edie Brickell, which earned the duo a Grammy for Best American Roots Songs for “Love Has Come for You.” In 2016, Bright Star, a musical based on the duo’s songs, debuted on Broadway and earned five Tony nominations.

Martin’s beloved banjo has been central to each project. Once marginalized in popular music, the instrument has recently experienced a resurgence in popularity, partly thanks to Martin’s live performances as well as his creation of the Steve Martin Prize for Excellence in Banjo & Bluegrass, which was been awarded to, among others, Rhiannon Giddens and Noam Pikelny of the Punch Brothers. Each project has shown him to be a compelling voice in the community, not only as a skilled player but as an imaginative songwriter penning lyrics that can be funny or poignant or both at once.

Rather than a departure, Martin’s musical career is an extension of the storytelling impulse that drove his work as a comedian, an actor, a screenwriter, a playwright, an essayist, and a novelist. “I think those influences come into play in these songs, because when I’m writing lyrics, I’m always thinking, What happens next? Where does the story go from here?” Bluegrass music is, among many other things, a means to spin yarns, to tell tales, to ponder the felicities of the heart.

“The Long-Awaited Album” is full of love songs. Some, like the boisterous “Caroline,” are humorous; others, like “All Night Long,” are heavy with a gentle sadness. “There’s nothing richer than talking about romance and heartache,” Martin says. “It’s something everyone can identify with. I love to hear stories about people breaking up—why and how it happened, who said what. I’m fascinated by those stories, but most of these are very optimistic love songs.”

Even the instrumental numbers on “The Long-Awaited Album” have the thrust of a narrative arc. “Bluegrass instrumentals conjure a place, especially the banjo,” Martin says. “The banjo especially is evocative of hills and dells and trees and joy.” That’s true of “Angelina the Barista,” a spry banjo ramble whose three-finger riffs conjure a well-trod dance floor somewhere in rural America—with just the slightest whiff of espresso in the air.

“He’s got a unique approach to the instrument, and that’s not an easy thing to accomplish,” says Woody Platt, who plays guitar in the Steep Canyon Rangers and sings a handful of Martin’s songs on “The Long Awaited-Album.” “His playing is so emotional and beautiful. He’s versatile, too. You don’t meet too many people who can play really great three-finger and really great clawhammer.” In the nearly ten years Martin and the Rangers have been playing together, they’ve only grown more agile in their playing, more assured, more ingenious. “Everybody has grown—individually as musicians and collectively as a band. We’ve done so much live work together, so many performances, so the band is always evolving.”

Like fish crawling out of the primordial soup, Martin and the Rangers will continue to evolve this fall when they embark on a lengthy tour with Martin Short. “Marty’s really funny,” Martin understates. “He takes some of the pressure off me, and I can relax and play some songs with the band.”

These songs have been percolating in Martin’s head for most of the 2010s, finding outlets at sound checks and live shows and band rehearsals. They began recording them piecemeal—no deadlines, no pressure—in cities around the country: Los Angeles, New York, Nashville, and Asheville, North Carolina, which the Rangers call home. At the helm was legendary producer Peter Asher, who has worked on classic albums by Linda Ronstadt, James Taylor, Neil Diamond, and many others; he also who produced Martin’s two albums with Brickell.“ The sessions went very quickly, because I’d say eighty percent of the tunes we had played onstage a lot,” says Martin. “We got to rehearse them while touring, so we worked pretty quickly in the studio. Because we knew the songs really well, we also knew how to change them up.”

The songs may originate with Martin, but he remains open-minded about how they turn out, welcoming new ideas, new tunings and tempos. “He’s very creative and knows what he likes,” says Platt, “but he’s also very willing to explore options and alternatives. And he’s patient. He’ll play a song with you a hundred times until we get it where we like it.”

Perhaps more than any other song, “Santa Fe” showcases that lively dynamic between Martin and the Rangers. Martin wrote the song, a simple story about a man meeting his lover at the airport, his verses conjuring a nervy anticipation and his banjo risking a speeding ticket as it races along the desert highway. Even a setting as mundane as an airport becomes something fantastical. “Then I see you brightly waving, I’m relaxed and thunderstruck.”

Asher admits he’s in awe of Martin’s songwriting: “‘Relaxed and thunderstruck’? Who puts those two words together? It’s amazing writing. He gets those little details that you don’t often see in lyrics. He even identifies the highway and the gate number at the airport. He just gets you into the story straightaway.”

And who puts a mariachi band on a bluegrass song? “That was Steve’s idea,” says Asher. “I didn’t want to get studio musicians to play that part, because it wouldn’t be the same. Luckily, I still had contacts in the mariachi world from when I did a record with Linda Ronstadt called Canciones de mi Padre. So we were able to get some of the best mariachi players in Los Angeles.” It’s more than just a clever idea, but rather a combination of styles and traditions that meld gracefully to complement the story and its setting, to enliven the romantic excitement between these two characters.

“Steve Martin has done a lot for bluegrass music,” says Platt, “just in the sheer volume of people he’s played the banjo for or talked about bluegrass with, whether it’s on late-night TV or at show with 5,000 people. He’s been an amazing ambassador for the banjo and for bluegrass music, and we’re all grateful for that.”

With “The Long-Awaited Album” Martin continues to nudge the boundaries of the banjo, respectfully but irreverently, which has established him as one of the most popular—and, in fact, among the finest—roots musicians working today. Yet, he remains a humble student of the instrument, still learning new techniques and considering new tricks. “My taste has grown to more melodic and simpler, so that I can accommodate being twenty years behind people like Béla Fleck and Noam Pikelny. I’ve written almost one hundred songs now, and I can’t believe I get to work with this great band that helps me work them out, orchestrate them, and add so much interest to them.”
31
What's This
Advertisement