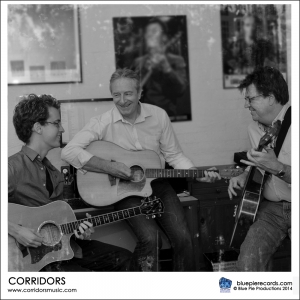 Contemporary Australian band, The Corridors, are in a music league of their own! The band from New South Wales are inspired by the French philosopher, Jean Paul Belmond, and live by his quote, “Sometimes facts speak louder than any logic and truth knows no language barrier”. Together they work with and for each other, taking risks in live performances and punishing each other mercilessly for the tiniest indiscretion. They are a team in the truest sense, where age differences are offset by genuine onstage chemistry and improvisation. Who would have thought that three somewhat reclusive characters can combine into such an interesting and passionate band? Not to mention that each member is equally skilled in the music department.

David is superbly skilled on a number of acoustic and electric instruments as well as keyboards, vocals and song writing. Make a note of this guy and keep your eyes peeled for his future. He has been writing and recording for quite a few years, having led acoustic outfits such as The Adelines and hard rock band, Movement, as well as funk/rock outfit One Flew East.

Graeme has played in lots of bands in the independent, original and blues scenes. He has played in countless pubs, clubs and also a range of festivals in the alternative and blues genre. He is also a writer and creator of music. Graeme played with The Jerry Mander Big Band, a fun time outfit. One of nature’s true gentlemen, he’s known as one of the most melodic and lyrical players to date. This is because his bass caresses the songs and other instruments in every one of his songs. Graeme was once in a band with a drummer who was so stupid that he didn’t know what a chorus was. Once Graeme found out himself, he adopted a policy to only associate with musicians who were either better or more intelligent than himself.

Geoffrey is a writer, actor and has a long track record of playing around the edges of the Sydney blues and roots scene, having worked with numerous players such as Don Hopkins and Jack Derwin. He was also a member of The Jerry Mander Big Band, which was infamous due to the fact that the namesake, Jerry never actually made it to a gig. Geoffrey has been a teacher of music for a long time, which means he is a keen student himself. He has played at numerous festivals, such as The Australian Blues Festival, Thredbo, The Great Southern Blues and the Rockabilly Festival.

With these skills and experience combined, Corridors, are a band who know what it takes to produce quality music and quality music is exactly what they deliver, always striving for nothing less than perfection! Despite the age differences, the trio know how to put on one a hell of a show and always leave their audiences astounded by their genuine and outstanding performances. Keep your ears peeled on this trio as their musical gifts and talents are bound to get them on the top radio charts!

In 2014 The Corridors signed a worldwide distribution and publishing agreement with Blue Pie Records USA. For all the latest news on the band and to download their new album please visit the bands official website at www.corridorsmusic.com. The Corridors are available at all leading digital retailers on the planet and their physical CD is available at the Blue Pie Records store at www.bluepierecords.com.