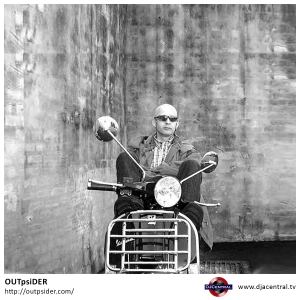 Formed of blood and bone, steel pierced flesh in anger, the earth split apart and the OUTpsiDER was reborn. His story is a hazardous journey through the minefields of life, dodging the flak while digging up the dirt. Alex is an abused child, destined to be part of humanity’s struggle against all that is wrong. He taught himself to hate. He taught himself to love, and at times he hated himself for loving. Emotionally, the OUTpsiDER has been challenged and the battles were hard fought. He lost some and won some… the ones drawn are the ones that live on. The scars are visible if you look beyond the verse.

How it all started with Blue Pie:

Alex Martin was introduced to Blue Pie via a mutual associate back in June 2002. Alex presented two concepts he was working on to Damien and was saying how hard it was to find a label like Blue Pie. Damien and Phil met with Alex on 3 more occasions and a deal was agreed to and now the rest, as the saying goes, is history. Alex is now virtually part of Damien and Phil’s extended family and, whether he likes it or not, they are part of his.

Alex has a daughter aged 6 “Arki Grace” and is married to Natasha . He lives on the upper north shore at Hornsby and when not in the studio, can be found cruising the streets or lurking in old vinyl record stores listening to the vibe for his next hit. To relax Alex goes for extended rides into the countryside on his beloved Vespa PX.

The idea was originally to focus on Alex’s original compositions, but during a production meeting back in October 2002 everyone got to talking about songs that stood out over the years and the song “Downtown” was suggested by Damien as a possible contender for a remix. Alex heard the track and immediately had the creative vision flowing. A week later, after many hours of editing, trimming and fine tuning, the first versions appeared from Alex’s home studio. “Downtown” was reborn.

We began to get in touch with the right people and before long David Baxter (“DB”) introduced the Blue Pie team to Tony Hatch. DB got Tony’s e-mail address and we emailed a digitised version of “Downtown 2003” to him. He was thrilled with the versions and you can see his response in the letter on the Blue Pie website. While all of this was going on Damien was musing over some of the songs and groups that Tony had been involved with in the past and on a Saturday morning at Leichhardt Damien purchased “The Searchers Greatest Hits”, put out by EMI and, bizarre as it sounds, this is the CD that David Baxter put together when he was at EMI.

Damien played “Sweets for my Sweet” over and over, Alex got the vibe for the track and they began to find others that he really liked … The Easybeats, The Animals, Them and additional Petula Clark and Tony Hatch material. We sent the tracks we created for “The Searchers” to Frank Allen and John McNally -founding members of one of the worlds greatest rock and roll bands who are still performing today. Their comments were: “The remixes of “Sweets for my Sweet” are just amazing. We could never have imagined our music, made four decades ago, could sound so fresh and exciting.

“We really do have to thank The OUTpsiDER for bringing us into the 20th Century and exposing us to a whole new youth culture”.
-Frank Allen and John McNally for the “Searchers” May 2003

The Dance Hall days of the 60’s, which reappeared in the late 70’s have twisted and morphed into what we still call ‘dance music’ today and the ever changing tastes of fashion have run parallel with styles to match. And so it goes on, Alex, who started DJ’ing back in 1978, is re-living his Mod days and remixing some of his favourite drops of 60’s magic which has produced some remarkable and inventive results. Classic and contemporary beats from one beat generation to another.

- Top 40 placements for 6 other releases on the Australian and UK iTunes charts.