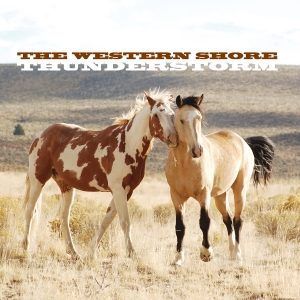 The Western Shore is a Nashville based husband and wife country/folk duo. Kalee and Charlie Smyth formed the duo in Kalee's hometown of Seattle, WA in 2012 and relocated to Nashville, TN at the end of 2013.

The Western Shore released their debut full length album titled Thunderstorm on October 1, 2014 to critical acclaim. The Guardian's Monica Tan wrote that Thunderstorm was a record of "...melodic tunes that cruise along like the wheels of a well-oiled wagon." The Alternate Root called it "dreamy...emotive...determined..." and Americana Music Times listed Thunderstorm at number two on their year end list "The Best Albums of 2014 That No One Told You About" with music critic Steve Circeo writing "It's well-produced, but still raw, and possesses an honesty I rarely hear." The band has been making a name for itself around Nashville playing popular clubs such as The Basement, The Five Spot, and The East Room, and has plans to tour this spring and summer, including opening dates with Nikki Lane.

Charlie hails from Chicago, IL and has been a part of several past projects including Laundry, Project Perfect, and Fontanelle. In 2010, Charlie recorded a solo folk/roots album in Chicago titled "Leaves", which critics praised for being "pensive, spare, beautiful, emotive and distinctively American" (eastportlandblog.com).

The Western Shore combines the traditional sound of classic country singers like George Jones and Dolly Parton with the metaphoric subtlety of writers such as Townes Van Zandt and John Prine.
5
What's This
Advertisement