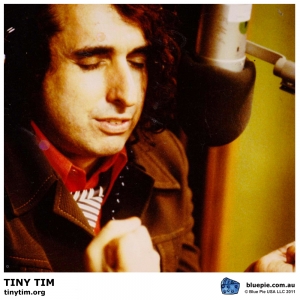 Herbert Khaury better known by his stage name Tiny Tim, (April 12, 1932 – November 30, 1996) was an American singer and ukulele player. He was most famous for his rendition of “Tiptoe Through the Tulips” sung in a distinctive high falsetto/vibrato voice (though other performances reveal a broader vocal range). While Tiny Tim was sometimes regarded as a novelty act, his recordings demonstrate a wide knowledge of American popular songs, particularly of the early 20th century.

Khaury was born in New York and grew up in an old apartment building in Washington Heights in Manhattan. When he was five years old his father brought home a wind up gramophone and a 78 rpm record that featured a 1905 recording of Henry Burr singing “Beautiful Ohio”. Young Khaury immersed himself in the music of the past, listening for hours in his room to Burr, Rudy Vallee, Al Jolson, Irving Kaufman, Billy Murray, Ada Jones, Byron G. Harlan, and Bing Crosby.

Khaury began singing and playing the ukulele in his natural voice, without drawing much attention. In a 1968 interview on the Tonight Show, Khaury described the discovery of his ability to sing in an upper register in 1952: “I was listening to the radio and singing along as I was singing I said ‘Gee, it’s strange. I can go up high as well.” He then entered a local talent show and sang “You Are My Sunshine” in his newly discovered falsetto, and it brought the house down. From there Khaury began to experiment with different stage names such as Darry Dover, Vernon Castle, Larry Love, and Judas K. Foxglove. He finally settled on Tiny Tim in 1962 when his manager at the time, George King, booked him at a club that favored “midget” acts.

Throughout the 1950s and early 1960s, Tiny Tim developed something of a cult following. In the 1960s he was seen regularly near the Harvard University campus as a street performer, singing old Tin Pan Alley tunes. His choice of repertoire and his encyclopedic knowledge of vintage popular music impressed many of the spectators. One admirer, Norman Kay, recalled that his outrageous public persona was a false front belying a quiet, studious personality: “Herb Khaury was the greatest put-on artist in the world. Here he was with the long hair and the cheap suit and the high voice, but when you spoke to him he talked like a college professor. He knew everything about the old songs.”

Between 1962 and 1966 Tiny Tim recorded a number of songs at small recording companies, with several of them being made as acetate discs and one actually released as a 45 record.

Tiny Tim appeared in Jack Smith’s Normal Love, as well as the independent feature film You Are What You Eat (his appearance in this film featured him singing the old Ronettes hit, “Be My Baby” in his falsetto range; also featured was a rendition of Sonny and Cher’s I Got You Babe, with Tim singing the Cher parts in his falsetto voice, along with Eleanor Barooshian reprising Sonny Bono’s baritone part. These tracks were recorded with Robbie Robertson and the other members of what was going to become known as The Band. The latter performance led to a booking on the massively popular Rowan and Martin’s Laugh-In, an unpredictable American television comedy-variety show. Dan Rowan announced that Laugh-In believed in showcasing new talent, and introduced Tiny Tim. The singer entered carrying a shopping bag, pulled his soprano ukulele from it, and sang a medley of “A Tisket A Tasket” and “On the The Good Ship Lollipop” with a dumbfounded Dick Martin standing near.[3] In his third performance on Laugh-in, Tiny Tim entered, blowing kisses, preceded by an elaborate procession of the cast, and after a short interview, sang “Tiptoe Through the Tulips”.

By the time of this appearance, he had a recording contract with Reprise Records. He made a name for himself as a novelty performer, guesting with Johnny Carson, Ed Sullivan, and Jackie Gleason. At the height of his career, he was commanding a weekly salary of $50,000 in Las Vegas, Nevada.[citation needed] “Tiptoe Through the Tulips” became Tiny Tim’s signature song. He sang it in homage to its originator, singer-guitarist Nick Lucas. He invited Lucas to sing at his wedding in 1969.

In 1968, his first album, God Bless Tiny Tim, was released. It contained an orchestrated version of “Tiptoe Through the Tulips”, which became a hit after being released as a single. The other songs displayed his wide-ranging knowledge of the American songbook, and also allowed him to demonstrate his baritone voice, which was less often heard than his falsetto.