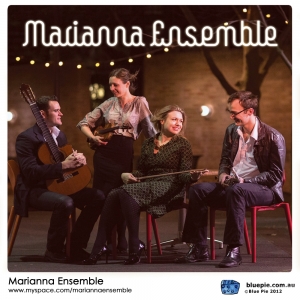 Maria was born in Moscow, where she studied choral conducting and piano until moving to Australia in 1993. In 1997 Maria attained Associate of Music Australia diploma in piano and performed a solo at the Opera House HSC Encore concert. She received a scholarship to study at the Sydney Conservatorium of Music and graduated in 2001 majoring in classical piano. In 2006 Maria completed a Master of Creative Arts degree majoring in opera, at the Newcastle Conservatorium.

As a soprano, Maria performs in solo recitals, radio broadcasts for ABC classic FM and with Opera Australia. Maria has been featured on the ABC radio in the “Rising Stars” program, “Saturday Sessions” and “Sunday Live”.

In 2009 Maria was the Lady Fairfax New York Scholarship finalist. In July 2008 Maria won the MIETTA competition – a national award worth $15,000 presented to an outstanding Lieder singer. The distinguished panel was headed by Maestro Richard Bonynge, Richard Mills, Prof. John Poynter, Stephen McIntyre and Margaret Baker-Genovesi. Also in 2008 Maria was a finalist of the national Italian and German awards and the National Aria competition – Canberra. In 2007 Maria was a finalist in the National Covent Garden Opera Award and German Operatic Award. She travelled to Berlin in September 2007 on the artist scholarship from the Goethe Institute.

Russian born, Anna Okuney started playing violin at the age of five. After migrating to Australia, Anna continued her music education through the Your Musicians’ Program at the Australian Institute of Music and as a scholarship student at the Methodist Ladies College. It was during this time that Anna received her Associate Diploma in Music and soon after, her Licentiate Diploma in Music. Anna then went on to complete her Bachelor of Music, majoring in performance at the Australian Institute of Music. Anna received a scholarship to attend the prestigious Meadowmount School of Music in New York, where she studied violin with Professor Gerardo Ribeiro of the Northwestern University in Chicago and chamber music with Patricia McCarty of the Boston Symphony Orchestra.

The ensemble draws on the multi talents of its members, which between them share backgrounds in opera, jazz, folk and contemporary music. Since its beginning the ensemble’s original compositions and arrangements of folk and classical repertoire have been winners of several awards. Marianna will perform a recital for “Sunday Live” show – ABC classic FM on March 14th. Also this year “Marianna” will be featured in the up-coming Peter Butt “I-Spry” film about ASIO and KGB in the 1950s-60s Australia for ABC television.

Marianna Ensemble are a Blue Pie Records artist and are published by Blue Pie Publishing USA.