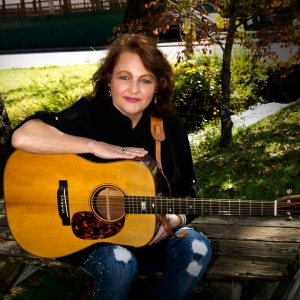 Here are two songs from Dale Ann Bradley's upcoming album, "Pocket full of Keys." "Til' I Hear it from You" is Dale Ann's bluegrass interpretation of the now classic hit made famous by the Gin Blossoms and "Sweet Hour of Prayer" is a showcase in Gospel form of some of the incredible heartfelt vocals that Dale Ann Bradley is known for. Check them out and see for yourself.

Bluegrass/Americana artist Dale Ann Bradley, who has released albums both as a solo artist and with the New Coon Creek Girls, is known for her distinctive, gentle vocal phrasing and covers of popular (yet non-genre-related) songs by artists such as U2, Gordon Lightfoot, Jim Croce, and Stealer’s Wheel.

She grew up in southeastern Kentucky and has lived in the bluegrass state for most of her life; her father was a coal miner and Baptist minister. Bradley auditioned unsuccessfully for the New Coon Creek Girls in 1988 and then spent the next couple of years working as a solo artist in Renfro Valley. She finally joined New Coon Creek in 1991 and performed on the group’s 1994 Pinecastle Records debut, The L&N Don’t Stop Here Anymore. Bradley’s first solo album, East Kentucky Morning, came out in 1997 and largely consisted of compositions by Dale Ann Bradley and New Coon Creek ally Vickie Simmons. The project also featured a celebrated take on U2’s “I Still Haven’t Found What I’m Looking For,” which helped the album go Top Ten on both the Gavin Americana and Bluegrass Unlimited charts and earn high critical praise.

When the final New Coon Creek Girls album appeared in 1998, “featuring Dale Ann Bradley” was added to the group’s name. Shortly after, the outfit would become Dale Ann Bradley and Coon Creek.Bradley’s sophomore release, 1999’s Old Southern Porches, featured a cover of Stealer’s Wheel’s 1973 hit “Stuck in the Middle With You.” Members of Coon Creek, who by this time featured male players, performed on the album. Bradley’s last release on Pinecastle records was the solo effort Songs of Praise and Glory in 2001. She has since gone on to win multiple Female Vocalist Of The Year Awards at the IBMA awards show.

– All Music Guide
30
What's This
Advertisement