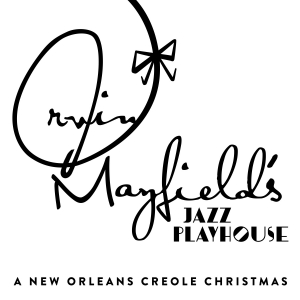 The Grammy and Billboard award winning trumpeter and bandleader, Irvin Mayfield, debuts his first album of holiday music with A New Orleans Creole Christmas, a collection of timeless holiday classics reinterpreted by the widely-recorded cultural ambassador of New Orleans. With his 12th release on the New Orleans source for jazz, Basin Street Records, Mayfield demonstrates his maturity as a player and arranger with the handpicked small ensemble called The New Orleans Jazz Playhouse Revue. The album blends traditional-style playing on the upbeat rendition of “O Tannenbaum – O Christmas Tree” with soulful, gospel-inspired versions of “Silent Night” and “Winter Wonderland”, and melodic, modern jazz renditions of other favorites such as “The Christmas Song” and “Have Yourself a Merry Little Christmas”. Michael Watson graces the listener with his velvet singing voice on the Vince Guaraldi/Lee Mendelson classic, “Christmas Time is Here”.

A New Orleans Creole Christmas was recorded at Irvin Mayfield’s Jazz Playhouse on Bourbon Street in New Orleans. Recording on a street famed as the origin of Jazz, the Grammy-winning artist continues his mission of placing Jazz at the center of American culture and advancing a time-honored tradition in a city known for its music.

A New Orleans Creole Christmas is sure to delight the serious jazz listener and families looking to enjoy a fresh take on their favorite Christmas melodies, as they spend time together this holiday season.

Irvin Mayfield Bio
Irvin Mayfield, 37, is a Grammy and Billboard Award-winning artist with 25 albums to his credit. Mayfield is the founding Artistic Director of the New Orleans Jazz Orchestra and currently serves as Jazz Artist in Residence for the Apollo Theater; he served as Artistic Director of Jazz for the Minnesota Orchestra from 2009-2015. In 2009, he entered into a historic partnership with the Royal Sonesta Hotel and created Irvin Mayfield’s Jazz Playhouse, which brought “Jazz back to Bourbon Street” in the historic French Quarter. Mayfield was nominated to the National Council on the Arts by President George W. Bush and was subsequently appointed to the post by President Barack Obama in 2010; he served through 2014. He also received The Chancellor’s Award from the University of New Orleans (the highest ranking award given to a professor) in 2010 and was awarded an Honorary Doctorate from Dillard University in 2011. He and NOJO recently opened the first space built for Jazz in the city that created the music – The Peoples Health New Orleans Jazz Market.
5
What's This
Advertisement