Chip Taylor and the New Ukrainians 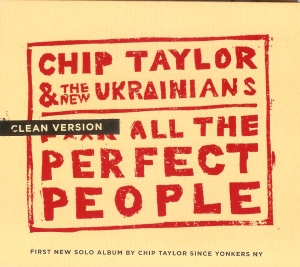 "As the sessions were being recorded as a sort of joke, I started calling the album "All The Perfect People". I'n Not sure what it meant but for some reason, it was "Us, against them" whoever the "them" was, and it felt good to Bjorn, me and the rest of the band." Chip Taylor


Critically acclaimed singer/songwriter, Chip Taylor is a Renaissance man whose determination and dedication have permeated all facets of his life.

Born in 1944 and raised in Yonkers, New York, Chip (a.k.a. James Wesley Voight) began his love affair with music early in life. At the ripe old age of eight, he convinced his parents to let him stay up late to hear a country radio station whose signal emanated from West Virginia. His penchant for the country genre found an outlet in Chip's high school band, "Town and Country Brothers" (King Records). After the band broke up, Chip tried his hand as a professional golfer. He met with some success but was soon sidelined with a wrist injury. It was then that he decided to give music his full attention. Subsequently, he signed a contract with Warner Brothers Records in 1961 and had his first top 100 hit single, "Here I Am".

Soon after, Chet Atkins heard a few of Chip's country songs and said it was hard to believe that he was born and raised in New York. Chet started recording several C.T. compositions with artists he was producing and Chip had his first big hit as a country songwriter with Bobby Bare's version of "Just A Little Bit Later On Down The Line".

In the mid 60's, Chip signed a staff writers contract with CBS' Blackwood Music. He started combining his country feel with R&B (his other musical love) to write songs that, to this day, remain a staple in the American music diet. His ability to write in varied voices and styles is demonstrated in two of his best known songs, "Wild Thing" and "Angel of The Morning". The ubiquitous, "Wild Thing", (Jimi Hendrix, The Troggs, X) with its guitar driven, sexually charged theme is in direct contrast to the hauntingly romantic, "Angel Of The Morning", (Merilee Rush, Juice Newton, Chrissie Hynde). Other Chip Taylor songs that are ingrained in American music are "Try (Just A Little Bit Harder)"' a performance favorite of Janis Joplin,"I Can't Let Go"' (The Hollies, LindaRonstadt) and " Country Girl, City Man"' (Ike and Tina Turner).

Additionally, along with producing partner, Al Gorgoni, he discovered and produced James Taylor(James Taylor and The Flying Machine), and Evie Sands (her version of "Any Way That You Want Me" became a big hit in 1968). They also produced Neil Diamond's "Brooklyn Roads".

He realeased six solo albums in the 70's and 80's, including Chip Taylor's Last Chance. Rolling Stone acclaimed this work as one of the best country albums of 1973. This album was one of the forerunners of the renegade cowboy movement containing several hit songs. One such song, "The Coalfields of Schickshinny", commemorates the lives of Chip's grandparents, refugees who had worked the hard coal mines of Eastern Pennsylvania at the turn of the century.

His family has played an important part of his songwriting process. He has written several songs for them throughout the years including Anne Murray's version of "Son Of A Rotten Gambler", a song written for his son, Kristian, that went to the top of the country charts. The song is particularly poignant as it speaks of his other great talent -- gambling -- that he explored extensively during a break from his recording career in the early 80's.

As a professional gambler, he was one of the foremost thoroughbred horse race handicappers on the East Coast. When Chip turned his sights on the gaming tables, he quickly gained notoriety with his black jack prowess; finishing third in the World Black Jack Championship in Las Vegas. Taylor became one of the most feared card counters in the land and was ulimately banned from every casino in Atlantic City. In the late 80's, along with friend, partner, and renowned handicapper, Ernest Dahlman, he garnered enormous winnings through his horse racing exploits, specifically in the form of massive pick six scores (wagers where often times you get paid enormous sums for picking six winners in a row). These windfalls are known throughout the gambling world and well documented by the I.R.S..

In 1993, Chip agreed to go on a national songwriters tour with Midge Ure, Darden Smith, Rosie Flores and Don Henry. As a direct result, his creative juices started to flow again. Bonnie Raitt recorded his "Poppa Come Quick" on herLuck of the Draw album and several other artists started recording his new material. Taylor released his retrospective collection, Hit Man (Gadfly Records), containing his versions of thirteen of his most successfull songs. He is now concentrating on making music again, with a commitment he hasn't felt since The Town and Country Brothers days.

In 1997, The Living Room Tapes, was released. Presented with an autobiographical honesty, it is an intimate look at Taylor's life and relationships as well as a welcome return of an incredible talent.

Seven Days In May (released April 1999 in the US), is a love story about meeting a pregnant woman named Florence at a swanky New York City bar. The CD tells the story of their seven days together--from spying her at the Pravda Bar to meeting the father of her baby. The album includes two duets with grammy winner Lucinda Williams (Through Their Mother's Eyes & If I Don't Know Love") and one duet with legendary Guy Clark.