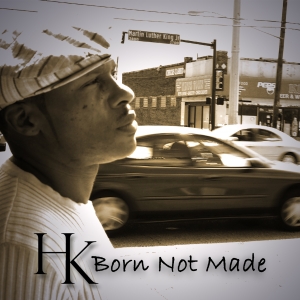 Harry Kelly McKenzie Jr. was raised in Baldwin Hills, California. Even at a young age he knew he was destined to create and perform music. Still today, HK reminisces on when he was toddler how his mother would often sing soulful lullabies. His gift for singing was discovered at the tender age of seven. His voice was powerful for his age and the attention was so overwhelming, that it made him a bit shy to reveal his abilities and love for singing. HK once said that it seemed like time would stand still while all those who were listening to his voice were paralyzed in amazement by his out of this world vocals. That kind of attention while growing up was hard for him to handle. He believes that every time he performs, the audience is able to look inside of his soul and truly see a vulnerable and sincere piece of him; a man born to perform for the world to see. HK’s unquenchable desire to write and sing music has led him to complete countless numbers of songs, in which some are debuted on his newly released cd, Born Not Made. HK’s sound has been compared to artist such as, Michael Jackson, Tyrese, Musiq, and Cisco just to name a few. His musical inspirations include the soulful voices and melodies of James Brown, Michael Jackson, Stevie Wonder, Marvin Gaye and Donny Hathaway.
3
What's This
Advertisement