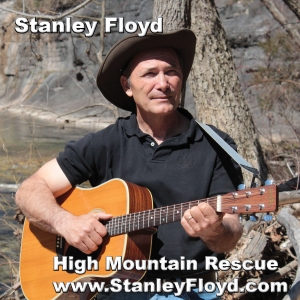 Stanley Floyd grew up on a small farm in the corner of Northwest Arkansas, in the Ozark Mountain country.

His Dad and Mom had nine children, Stanley being the fourth from the youngest. The family was poor, his father having to work two and three jobs at times to keep food on the table. There were many hardships growing up, but Stanley is very proud of his parent's sacrifice and devotion in spite of all the difficulties of life.

Many of Stanley's songs were inspired by these times and the rich and deep character and faith of the Ozark Mountain folk.

Though Stanley has sung and written many songs over the years, he had never recorded on album until he recently recorded and released two albums together, one gospel and one a collection of country songs.

He intends to release another album, or perhaps two, at the same time, again within the next year.

Though Stanley has traveled much in the last several years, he still makes his home in the Ozarks and has no intention of ever moving out of the hills.

Stanley has met people from many parts of the world and one of his favorite quotes is that of Will Rogers, "I never met a man I didn't like."

Visit me on Itunes, CD Baby, stanleyfloyd.com or Facebook