Feller and Hill - Brothers And Heroes 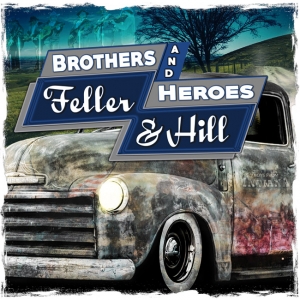 
Since the formation of Feller and Hill in 2010, Tom Feller and Chris Hill have established themselves among the top vocal groups in the bluegrass community. Combining their love for traditional bluegrass and classic country music, their music falls somewhere between Buck Owens and the Osborne Brothers. Hallmarked by tight harmonies and great songs, Feller and Hill have had some of the biggest bluegrass radio hits over the past few years with “Big Blue Roses” and “Government Blues.”

The first single “The Bugler” was written by Tom Holt, formerly of The Boys From Indiana, and features the lead and harmony vocals of Tom Feller and Chris Hill. “The Bugler” is a Civil War story about a bugle boy, who left home at a young age to join the Army as a bugler, in search of his father, who never returned from battle. Young Willie disappeared, himself, and never returned and his mother has searched endlessly to find him. They finally do reunite at a camp on one of the many battlegrounds his mother searched. The songwriter leaves it up to the listener as to whether Willie lived on...or his ghost still haunts the battlegrounds of the Great Smokey Mountains. The name "Willie" may have been inspired by a family member, Uncle Willie Gabbard, who served in the military during World War II. Tom indicated he wrote the song to sound like something very old, even though the song is brand-new and previously unrecorded.

Brothers And Heroes kicks off with the up-tempo “Hammer Down”, written by Gerald Evans, Jr., and never stops hard drivin’ and cruisin’ until crossing the finish line. Other songs featured on the album includes “Childish Love” written by Ira and Charlie Louvin; “Atlanta Is Burning” a popular Civil War song by The Boys From Indiana written by Aubrey Holt with vocals by Tom Feller, Chris Hill, Tony, Aubrey and Jerry Holt; two Felice and Boudleaux Bryant classics “Wake Up Little Susie” popularized by The Everly Brothers and “Tennessee Hound Dog” with guest vocals by Bobby Osborne; Patsy Cline classic “Back In Baby’s Arms” written by Bob Montgomery; “Love Is A Stranger” written by Bill Harrell with guest vocals by Larry Stephenson; “Duncan And Brady” traditional murder ballad about the shooting of a policeman by a bartender with vocals by Junior Sisk and the Chet Atkins & Jerry Reed instrumental classic “Jerry’s Breakdown” written by Jerry Reed.

Brothers And Heroes contains some of the best traditional bluegrass and classic country music from today and yesterday and combines the tight harmonies and strong lead vocals of Feller And Hill to create a fresh sounding album that will truly delight Bluegrass music lovers…It’s Fresh Grass with a Traditional Blend and Strong Roots.

TRACKS:
1. HAMMER DOWN
2. CHILDISH LOVE
3. ATLANTA IS BURNING (with Tony, Aubrey and Jerry Holt)
4. REBECCA OF NEW ORLEANS (with Heather Berry-Mabe)
5. THE BUGLER
6. BACK IN BABY’S ARMS
7. LOVE IS A STRANGER (with Larry Stephenson)
8. WAKE UP LITTLE SUSIE
9. LORD HELP ME DECIDE (with Lizzy Long)
10. DUNCAN AND BRADY (with Junior Sisk)
11. BE A GOOD GIRL
12. JERRY’S BREAKDOWN
13. TENNESSEE HOUND DOG (with Bobby Osborne)

It is no secret that one of Feller and Hill’s greatest influences is the music of The Boys from Indiana. A nationally touring act, The Boys from Indiana was the absolute kings of bluegrass in the Ohio-Kentucky-Indiana area, during the '70s and '80s. They were a hit at bluegrass festivals across the country, due to their robust stage presence and original songs. Their influence on Feller and Hill’s music should come as no surprise, as 60% of the classic lineup of “The Boys” (Aubrey Holt, Jerry Holt, Harley Gabbard, Paul Mullins, and Noah Crase) are related to Tom Feller (Aubrey and Jerry Holt are Tom’s uncles, and the late, Harley Gabbard was Tom’s great uncle).

Feller and Hill’s stage show is very reminiscent of the Boys From Indiana, which include that same robust stage presence, their dry brand of humor and a very fast-paced show that proves time and time again to be a crowd-favorite everywhere they go.

In addition to his family’s musical heritage, Tom has worked with Jerry Williamson and Redwing, The Larry Stephenson Band, Rhonda Vincent and the Rage, and Three Fox Drive, during his 30-year career. Chris has worked with The Wildwood Valley Boys, Gerald Evans and Paradise, The Karl Shifflet and Big Country Show, and The James King Band. In the past year, both Tom and Chris have made separate appearances on the Grand Ole Opry filling guest spots with Bobby Osborne and Rocky Top Express.

Feller and Hill will continue using their deep-rooted pedigrees in bluegrass and traditional music to grow their audience and deliver a high-energy show with rich vocals and smooth instrumentation at some of the largest festivals in the country. If you love traditional bluegrass, classic country, and southern bluegrass gospel music, then you’ll love Feller and Hill and the Bluegrass Buckaroos.

Feller and Hill are currently on tour. For more information go to fellerandhill.com.