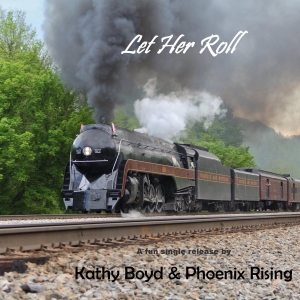 Based in Tualatin, Oregon – the award winning original roots music group Kathy Boyd & Phoenix Rising continues to stack up awards and accolades while performing their high-energy shows throughout the West. Awards include guitar player Dennis Nelson being named 2008 Roots Music Association Bluegrass Songwriter of the Year and banjo player Tom Tower winning the $10,000 prize in the 2010 City Love Music Contest. In October of 2015 the band brought home the honor of International Music & Entertainment Association 2015 Bluegrass Group of the Year.

With five CD’s in radio rotation, the band is known far and wide for their songwriting abilities and high energy entertainment style. In the words of Randy Shelton of Nevada’s “Silver State String Buster” magazine, "Kathy Boyd looks to be 100 lbs soaking wet but that little gal can knock a song right out of the park".

In 2014, "Spending Every Christmas With You" debuted as the #1 CD downloaded for holiday airplay for the second year and all ten songs immediately took up position on the Top 50 downloaded songs. The recording was nominated as the IMEA’s 2014 Holiday Album of the Year and the song “I’ll Be Home for Christmas (in the State of Oregon)” brought home the IMEA Holiday Song of the Year Award. Radio stations around the world continue to clamor for this original music that somehow feels as though it's been a part of our holiday culture for decades - indicating that Kathy Boyd & Phoenix Rising's "Spending Every Christmas With You" is well on its way to being a holiday classic. In 2015 music from this recording was developed into a television special and DVD titled “Bluegrass Christmas”.

Radio stations continue to line up to interview this personable group whose songwriting – especially that of member Tim Crosby – has been compared to legends such as Waylon Jennings, Woody Guthrie and Bruce Springsteen.

“After eleven years together we definitely have our own unique sound.” states KBPR band leader Kathy Boyd, “We’ve now reached a spot where we are so comfortable with who we are and what we do that it’s allowing us to stretch in new and more complex musical directions.”

“Audience response to all of our music continues to be enthusiastic, which in turn makes us better performers. It’s a huge circle of excitement and love that benefits everyone!”

The release of "Let Her Roll" marks the first single off the album "40 Years of Lonesome" that the general public gets to hear that will give them a taste of what the 6th album by Kathy Boyd & Phoenix Rising will be all about. A fun song about remembering to have fun - no matter how much trouble life throws at you, the tune was written by American Songwriter Steve Spurgin and also appears on his "Solo Flight" CD - in a much different format and under the title "Let 'er Run".

Be sure to check out the group's other albums to see where they've been and sign up to follow them as their journey continues onward. The phoenix continues to rise!