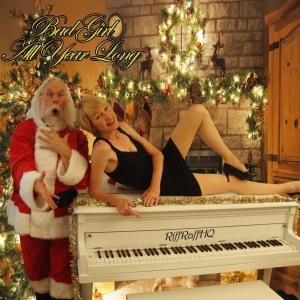 FANS: "Bad Girl All Year Long" is available for purchase on most major digital music distributors. We love you, RiffRaffers!

Sue Straumann and Steve Horvath's road to becoming RiffRaffHQ began as former co-workers who used to rehearse with eclectic country-bluegrass group the Termites of Tonality at lunchtime in a small company supply closet.

Sue Straumann is a songwriter, former professional sound engineer, and classically trained vocalist. Though a jokingly self-dubbed "Bad Girl", Sue will be the first to admit that her biggest breaks in the music business have come from working hard and being a nice person, falling into a Philadelphia-area recording studio job after offering to lend a helping hand to some tired engineers stowing audio cables one evening, and being recommended due to her down-to-earth personality for study under vocal coach to a number of Top 40 pop artists, Mary Pettibone, at the home of her son Shep Pettibone, reknowned music producer and co-writer with Madonna of the #1 pop song "Vogue".

Proficient in playing numerous musical instruments (keyboards, guitar, saxophone, accordion, ukulele, and upright bass to name a few), Steve Horvath, known as "H-Man" or "Little Stevie" to his friends and fellow musicians, provides the heart and soul of the musical arranging and performance for RiffRaffHQ. A lifelong musician, Steve is undaunted by any music genre, playing pop, jazz, bluegrass, R&B, rock, disco, big band, and anything else anyone can throw at him with the same flawless ease.

Together the complimentary talents of these two performers combine to form a duet that is a special blend of original music and a quirky sense of humor. RiffRaffHQ's initial release, Bad Girl All Year Long, was #1 on CD Baby independent artist holiday charts for 7 weeks and has become a hilarious new holiday classic.
7
What's This
Advertisement