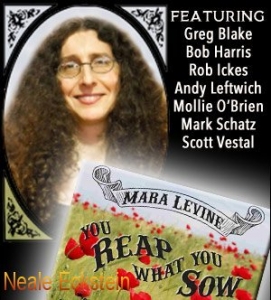 Singer and jewelry designer Mara Levine is known as an exceptional song-finder, selecting and then creating beautiful interpretations of fine traditional and contemporary songs. Her September 2017 single release ‘By My Silence” (Ellen Bukstel & Nick Annis © 2008)with touring partners Gathering Time was the #1 song on the International Folk DJ Chart. Her most recent CD, Jewels and Harmony, received stellar reviews and was the #1 album, with the #1 song and #1 artist positions on the International Folk DJ Chart for January 2013, placed #3 overall for 2013, and was named #4 Cover Album of 2013 by Cover Lay Down. Levine was selected for a juried showcase at the 2014 NERFA conference and she tours nationally, often sharing shows with the trio Gathering Time. They will tour Germany together in April 2018. Mara also performs in duos with Caroline Cutroneo and Terry Kitchen. She has appeared on numerous radio programs and performed at various venues and festivals throughout the country.

Mara has just released "You Reap What You Sow" by Nashville based songwriter Susan Shann, to Folk and Bluegrass radio for airplay beginning November 1, 2017

“Mara Levine’s clear and expressive vocal on “You Reap What You Sow” is supported by a stellar lineup of musicians who together deliver a tasteful and artfully produced rendition of this heartwarming song.”
- Mark Schatz

“I met Sue Shann at the SERFA conference in 2016 and she gave me two of her CDs. “You Reap What You Sow” grabbed me immediately. I loved the melody, especially on the bridge. I love to invite audience participation and the chorus was catchy, singable and the entire song resonated with me as a positive message about doing your best at whatever you do and reaping the rewards or fruits of your labors. One could also interpret the song to mean caring for others and nurturing relationships, in particular keeping your word and your commitments and that this will be returned to you in kind. I heard it clearly in my mind as a bluegrass song and sought out the best of blue-grass talent for the recording. The song also fits beautifully with the overall theme of my upcoming CD Facets of Folk, which has several socially conscious songs, some songs about being a better person and considering how we treat others, as well as some favorites and new discoveries written by contemporary songwriters.” ~Mara

“Some people, like the one described in Leonard Cohen’s classic song, are born with a Golden Voice. Mara Levine is one of those gifted few who fits that definition. Hearing her sing makes you stop whatever you are doing and LISTEN! Known for her warmth, sincerity and impeccable natural musicality, she make us all listen more intently, and celebrate the beauty that she brings to every song she sings and inspire us to do better ourselves, in whatever field we work in. Try to go to hear her live or listen to anything she has done or does. Mara Levine’s beautiful CD “Jewels and Harmony” makes it possible to celebrate excellence in the art of jewelry making and singing. Beauty is in the eye of the beholder when you see Mara’s stunning designs, and in your ear and heart when you hear her sing. Listening to her CD “Jewels and Harmony” reminds us that we can savor beauty in all is forms. Thank you, Mara for what you have done and continue to do. - David Amram - composer, conductor, multi-instrumentalist

"Mara, I think you are one of the best singers of your generation. Every songwriter worth their salt should be sending you their tunes. You have such a beautiful, timeless quality to your voice and you make beautiful recordings. I just LOVE what you do." - Christine Lavin, singer-songwriter


"I first met Mara Levine at Folk Alliance in Kansas City. She was singing with a Bluegrass band. I tracked her down so I could hear her beautiful voice again. I have been listening to and playing Mara’s music ever since. I had the pleasure of booking Mara into KAFM's Radio Room in Grand Junction, Colorado. The audience loved her! Well-known as a folk singer, Mara has stepped into Bluegrass with “You Reap What You Sow." Carefully chosen musicians have given Mara the instrumentation and harmony vocals that she deserves. Mara selects songs with great care and her singing evokes emotions that you and I can feel in each one. Her voice is clear and deliberate as she takes you on a journey in each song"
- Veta Gumber, DJ Bluegrass and Beyond
KAFM Radio